The overwhelming majority of California Masons first learned about the fraternity from a family member, friend, or trusted coworker. And yet we know that Masons can be hesitant to talk openly about their membership, their lodge, or even about Freemasonry in general. That’s often out of an erroneous belief that they are prohibited from discussing the fraternity, or that they have to wait until someone asks them first. Neither are true: Members are encouraged to discuss Freemasonry with the people closest to them and to answer any questions they may have about it.

That’s why this July, we’re asking California Masons to do something they probably haven’t done before: Tell the world that #ImAMason.

From July 1–14, we’re asking all members who are comfortable doing so to record a video, take a selfie, or write a post on Facebook or Instagram that explains what they get out of their membership, and to include the hashtag #ImAMason. That way, we can compile these posts and help share them even more widely. In addition, we’re asking members to temporarily change their profile photo to an #ImAMason button. By showing the people around us that they already know a Freemason—even if they didn’t know it—we can help to demystify Masonry in general, and maybe encourage someone who’s curious about it to reach out. (For instructions on temporarily changing your profile picture, see here.)

Imagine: That second cousin you’re connected with on Facebook who doesn’t know how much your lodge means to you. Or a coworker who’s always been intrigued by Masonry but never known where to begin with it. Our hope is that those people will see these posts and decide to learn more.

So please join us in this effort. Tell your story of why #ImAMason. Together, we can help build on the effort to increase positive public awareness and drive the future of the fraternity.

Opening Up About Masonry

Let’s talk numbers. These come from a 2020 survey conducted by the Grand Lodge of current and prospective members.

This is a solvable problem.

That’s what the #ImAMason campaign is all about.

On July 1, all members will receive an email announcing the campaign and describing how it works. (That’s copied below here, as well.) If you are comfortable doing so, we encourage you to participate—and to get your fellow lodge members to, as well. The more Masons who talk openly about the fraternity, the more of an impact we can make on improving our public awareness.

Don’t know what to say? DOWNLOAD OUR NEW BOOKLET, titled Opening the Door, for some helpful and simple answers to common questions about Freemasonry. Or check out our brand-new webpage, WHAT IS FREEMASONRY, meant to give newcomers a basic sense of things. These aren’t a script; they’re a starting point to help members discuss the fraternity in general and how it works. But the best explanations will come from real members discussing the real things they get out of it. If you’d like hard copies to be mailed to you or your lodge, you can request below:

From JULY 1–14, we're asking all members who are comfortable doing so to post a short message on Facebook or Instagram saying why Freemasonry is important to you. By including the hashtag #ImAMason, we'll be able to compile these posts and share them even more widely. This can be a written post or filmed as a video—whatever you prefer. 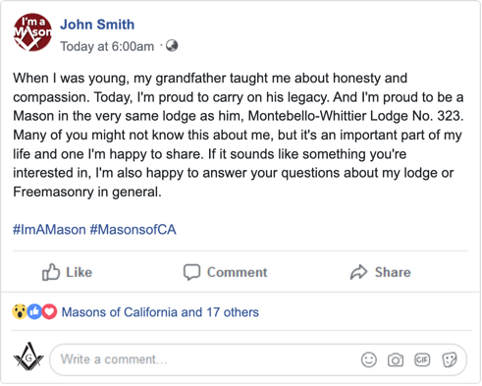 The Membership Restoration Campaign is back! In 2020, the Grand Lodge first offered this program to members who’d been suspended for non-payment of dues. That year, more than 1,300 of them—that’s about 12 percent of the people approached—signed back up. This year, we have an opportunity to restore even more members who for one reason or another have drifted away from the fraternity.

To participate, lodges must opt into the program by passing the Restoration Campaign Resolution by a two-thirds vote at a stated meeting. (If your lodge already participated, you’re already in.) Once your lodge has agreed, the Grand Lodge will reach out to a list of your suspended members and offer them a simple, flat-fee opportunity to return to good standing.

As Grand Master Wilkins said, “we’re not only doing right by our own brothers, we’re also positioning our fraternity for success. Either way, it’s the right thing to do.”

Questions? Reach out to Member Services at memberservices@freemason.org.

Stay on track of lodge business and prepare for important deadlines. Here’s your July checklist.

Senior Warden, along with Executive Committee

Use this content to spread the word about resources provided by the California Masonic Foundation, the Masonic Homes of California, and more.

New: Services at MCYAF Across the Lifespan

New: The Pavilion at the Masonic Homes

Last month, we asked has your lodge hosted a presentation from Masonic Outreach Services in the past five years? Of those that responded:

Here's your next survey question