First, the good news: Membership inquiries to the fraternity are up—way up. The reasons for that are myriad, including a recently revamped online membership portal at freemason.org, new online resources geared toward prospects, and a redoubled social media push. There’s also the old-fashioned word-of-mouth promotion that members and lodges throughout the state have been encouraged to participate in (and which they have). What it’s all added up to is a spike in the number of people reaching out online about joining a lodge. To wit:

Compared to previous years, that’s an incredible increase, and reflects well on the hard work that our lodges and grand lodge have invested lately. For the first time in years, in some cases, our lodges now have surfeit of prospects interested in applying for membership.

Now, the not-great news: Not every lodge is well-prepared to handle new prospects.

Whether it’s because a lodge doesn’t have a specific person or group established to welcome prospects, or their info is simply getting lost in the shuffle, lodges are too often losing contact with prospects who have expressed an interest in joining the fraternity. And when prospects don’t hear back from lodges, they walk away. The fraternity loses a potential new member and the reputation of Freemasonry takes an unnecessary hit.

So: We’ve made great progress on bringing more prospects into the membership pipeline. Now it’s time to work on making sure our lodges have the information and resources they need to handle those prospects.

Blake Green is hoping to fix that. Green, a past master of Sacramento No. 40, was recently hired as the Grand Lodge of California’s Membership Advisor. His role involves screening online prospects to weed out unserious or ineligible candidates, having initial conversations with them about Freemasonry in general and individual lodges in particular, and ultimately referring them to a local lodge. Says Green, “I’m the proverbial Virgil, guiding prospects along on their journey from initial interest to meeting their potential new lodge.” Before serving in his current role, he was also his lodge’s prospect point person. “Now, I do that on the state level,” he says.

Green’s job doesn’t end when he’s passed a prospect off to a lodge, however. He'll follow up with each prospect and lodge weeks or months later to make sure they’ve connected and had all their questions answered. For those that haven’t found a perfect fit, he’ll refer them elsewhere.

In the short time since taking on the position, he’s directed prospects to about one-third of all lodges in California—meaning many officers have already interacted with him at least once. In the months ahead, expect that number to rise. And remember that Green is not just a resource for prospects—he’s also here to help lodges and lodge leaders answer questions they may have about membership. “I’m here to help lodges. That’s my mission,” Green says. “I also want to help the fraternity grow and share Freemasonry with more people. That’s what gets me to the phones every day.”

Questions? Reach out at bgreen@freemason.org.

What Lodges Can Do to Handle Incoming Prospects

As more prospects are routed from online inquiries to local lodges, it’s important that those lodges have processes in place to welcome and receive them. Here, Green and members of the Grand Lodge Leadership Committee offer advice on ways to handle a larger flow of prospective members—and ways successfully integrate them. (For more, see the October 2021 issue of the Leader.)

How to Respond to Membership Inquiries

A hearty thank-you to everyone who participated in our first-ever #ImAMason social media campaign. As many of you likely experienced, it was quite a sight to see our Facebook feeds taken over by red square-and-compass profile pictures. And some of the stories we read from members about what Freemasonry means to them were truly inspiring. Here are a few favorites: 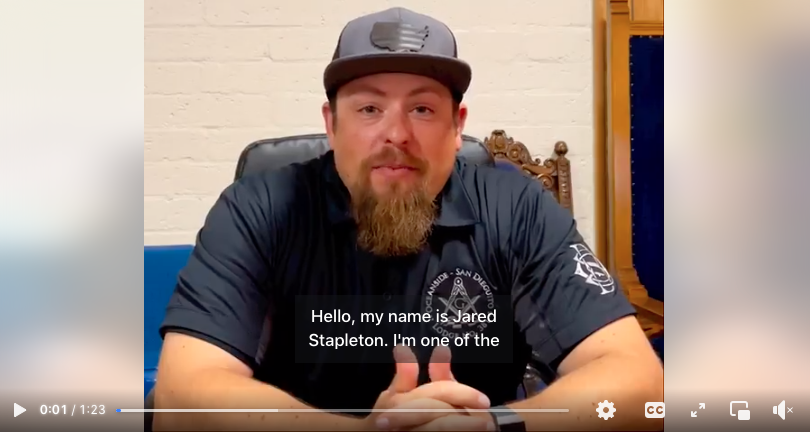 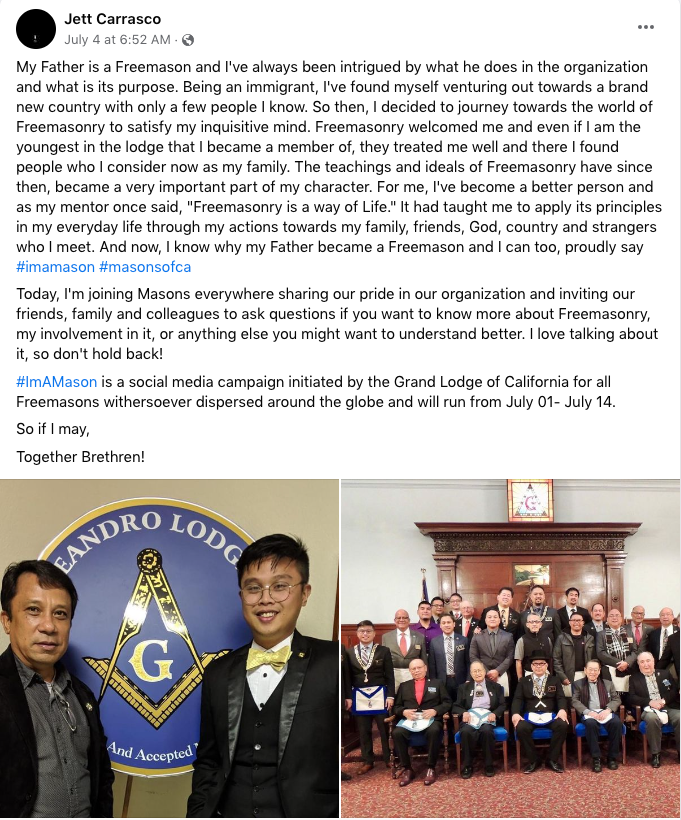 We even saw other Masonic jurisdictions pick up on the trend—including posts from the grand lodges of Georgia, South Carolina, Washington, Ohio, Arizona, Texas, and even as far afield as Queensland, Australia.

All in all, #ImAMason reached approximately 2.8 million people, making it by far our largest and most successful social media campaign ever. Hopefully, this can be the spark that gets our members and lodges comfortable talking about everything that Masonry means to them—and helps us make good on our 2025 Fraternity Plan commitment to improving positive public awareness of Freemasonry.

Stay on track of lodge business and prepare for important deadlines. Here’s your August checklist.

Senior Warden, along with Executive Committee

Use this content to spread the word about resources provided by the California Masonic Foundation, the Masonic Homes of California, and more.

New: Services at MCYAF Across the Lifespan

New: The Pavilion at the Masonic Homes

Last month, we asked do you ever talk about Freemasonry, your membership, or your lodge on social media (Facebook, Twitter, Instagram, LinkedIn, etc.)? Of those that responded:

Here's your next survey question