EVEN WHILE APART, THE MASONS OF CALIFORNIA
JOINED TOGETHER IN ALL-NEW WAYS.

If necessity, as they say, is the mother of invention, then 2020 was a fertile year for the Masons of California.

On March 19, when Governor Gavin Newsom issued the statewide stay-at-home order, lodges across the state began to realize they were going to need to adapt to life online, at the very least to offer some measure of fellowship and connection. By the year’s end, they’d done far more than that—and shown that in adversity lies ample opportunity.

As ever, Masons and lodges led the way for the fraternity, hosting countless Zoom meetups, check-ins, and happy hours—both with lodge brothers and with prospects and Masons from other lodges. “Everything started organically,” says Mike Ramos, lodge development manager for Grand Lodge. “But we knew we needed to do something to keep Masonry integral to our members’ lives.”

With that in mind, Ramos and others at Grand Lodge—all of whom were working remotely—pieced together a slate of their own digital programming. In early April, then–Grand Master John Trauner hosted the first of what would become a weekly gathering on Facebook Live to toast medical professionals and frontline workers. The event was a nod to the Masonic tradition of the 9 p.m. toast to absent brethren—a pandemic-induced spin on a centuries-old custom. Past grand masters and other Grand Lodge officers hosted subsequent gatherings, 20 in all, viewed by a total of nearly 300,000 people around the world. 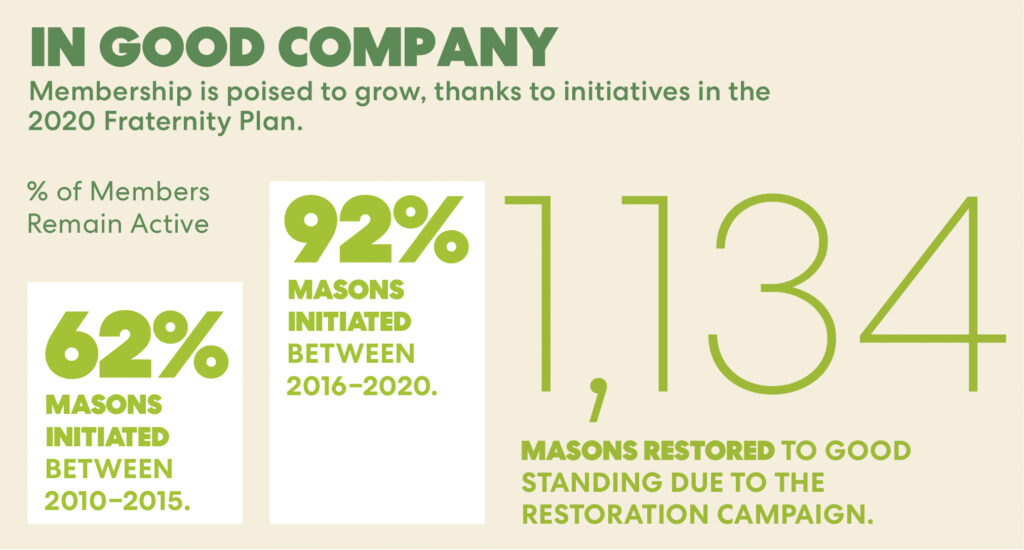 Even more impressive was the rollout of the free Online Masonic Speaker Series, which launched in late April with a livestreamed lecture from Patrick Craddock— founder of the Craftsman’s Apron shop, a member of Prometheus No. 851, and a well-known expert on Masonic garments— about the history of the Masonic apron. More than 1,000 Masons from California and beyond tuned in. Craddock’s talk was the first of 20 lectures in 2020 that attracted a total of more than 10,000 viewers. Other speakers included Dr. Oscar Alleyne, an infectious-disease expert and a New York Mason, and Teresita Aréchiga, grand master of the Women’s Grand Lodge of California.

In May, the series welcomed Dr. Andreas Önnerfors, an authority on Scandinavian Freemasonry and master of Quator Coronati, the leading international Masonic research lodge.

Önnerfors’s presentation began a six-lecture sequence, presented in partnership with QC, in which that lodge’s expert speakers addressed topics related to Masonry in the American West.

All told, the 20-lecture Online Masonic Speaker Series was the most widely attended Masonic educational programming ever offered by the Grand Lodge of California—and there’s more to come in 2021. “It was an absolute success,” Ramos says. “We had people from South Africa, India, and Switzerland tuning in to hear these speakers. It was beyond what we could have hoped for.” 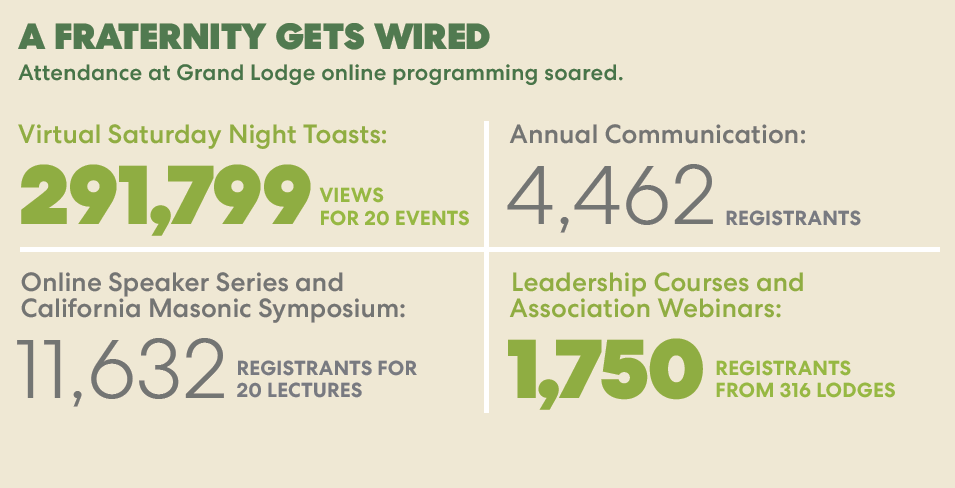 While the Speaker Series was undoubtedly the splashiest online offering, it was far from the only one developed by Grand Lodge—nor was it the trickiest to pull off. In April and May, meetings for Hall and Secretary Association members were adapted into streaming webinars (676 people registered); in July, what’s typically the Master and Wardens Retreat was reimagined as the Online Masonic Leadership Course, with more than 1,000 individuals representing 316 lodges. Another retreat, for district inspectors, was held virtually in September. More than mere PowerPoint slideshows, the digital retreats were interactive development sessions that attracted not only California Masonic leaders, but also Masons in 53 countries. “We made it clear that despite the pandemic, we would continue to provide services to the extent we could,” says Jordan Yelinek, director of member services and assistant grand secretary.

But by far the most complex event to move online in 2020 was the Annual Communication. “It serves as a fraternal homecoming of sorts,” Yelinek says. “It’s an opportunity for brothers throughout the state to come together—and we wanted to have that this year, even if only virtually.” Using a combination of live feeds shot in the auditorium of the California Masonic Memorial Temple in San Francisco, prerecorded speeches, and prepared video, the Grand Lodge was able to meet, conduct a truncated slate of business, and elect a new grand master in Arthur Weiss. Some 1,500 people attended the business sessions, and more than 1,200 viewed the installation of new officers.

Though it turned out to be a success, don’t expect another virtual Annual Communication anytime soon, Yelinek says. Do, however, expect to see some enhancements to the live event in years to come. Elements of online training might stick around, too, though you can bet that in-person gatherings won’t disappear. After all, at its heart Freemasonry is about bringing men together. And as this year proved, that can happen in lots of different ways.

Read More From the Annual Report 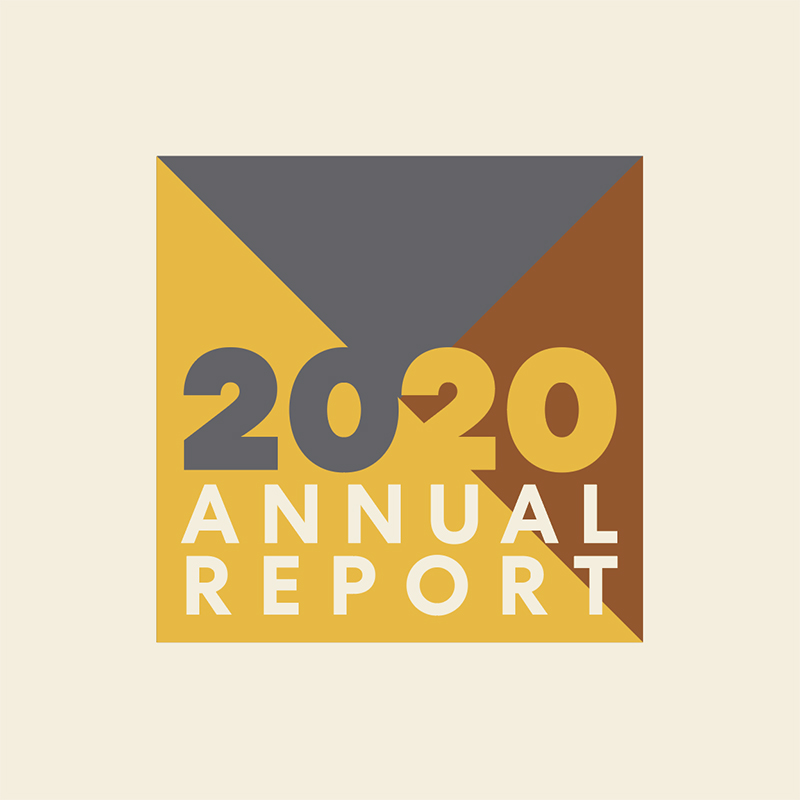 The World in Harmony

In 2020, at least one new online offering from Grand Lodge had actually been planned well in advance. The iMember 2.0 platform rolled out July 1, offering Masons a single place to search and update membership records, pay lodge dues, chat with fellow members, and access important resources.

Further, the system provides lodge leaders with custom dashboards that give an unprecedented view of membership engagement, finances, and communications.

Adoption has been strong. Approximately 10 percent of California Masons logged on to the new system in the first three months—a higher rate than in other Masonic jurisdictions using the platform; in 89 percent of lodges, at least one officer per month makes use of the dashboard.